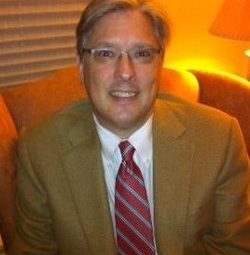 With over 30 years of experience in community planning and real estate development, Mark Angelini was a natural choice for his role as president of Mercy Housing Lakefront.

Residents of MHL housing have access to services that include therapy, educational programs, job training, financial instruction, and programs improving access to healthcare.

“In many cases these may be individuals who were not living in a home for 20, 30 years – or never had a real stable home of their own,” Angelini told the Daily Whale. “We help them get oriented to that reality.”

Angelini was raised in the Little Italy neighborhood on the Near West Side. He studied engineering in college. When he graduated during the recession in the early 1980s, he landed a job writing economic papers about deindustrialization for the Adlai Stevenson gubernatorial campaign. After that, Angelini served as chief of staff to Alderman Gerald McLaughlin (45th) during the infamous Council Wars.

He got his start in real estate working for the Shaw Company in 1993 as part of a neighborhood revitalization effort when Sears, Roebuck & Co. moved their headquarters out of Homan Square. Following a stint as a leader in advisory services for S.B. Friedman & Company, Angelini received a call about an opening at Mercy Lakefront Housing in September 2010. He accepted the job and ran the organization’s real estate division until July 2014, when he succeeded Cindy Holler as president.

The Daily Whale had the chance to meet with Angelini to learn more about his organization’s mission and current projects. An edited transcription of that conversation follows.

MA: Mercy Housing Lakefront has been around since 1986. It originally started as Lakefront SRO. SRO stood for single room occupancy. That was really a model that was focusing exclusively on the needs of chronically homeless individuals – individuals with a lot of mental health and addiction-related issues. About 2005, Mercy Housing came into the Chicago area, purchasing about 450 units of family housing in Austin on the west side. Lakefront SRO had gotten to a point where they really needed to merge in with a bigger partner. So the entities merged and that’s how we got Mercy Housing Lakefront. …

We’re always seen first as a real estate developer, which is fair enough because housing is in our name. But really housing is just part of what we do. There’s about four or five other activities we do which … create a platform for the families and the communities that we’re in. Our goal really is to help the families and the residents we serve, as well as the communities that they live in, to move on a better trajectory in their lives.

DW: How does MHL choose the sites for its affordable development projects?

MA: The first thing we look at is where are there communities that have a need for what we do that we feel we can find an appropriate property to either construct or renovate. So that’s a starting point. But because we don’t want to create these kind of Mercy oases that aren’t surrounded by a lot of support, … we also look to make sure we are coming into a community that has other long-term committed stakeholders that have shown a willingness to stay with a community for a period of time. … We look for other players that we can partner with in the role of community developers, as well as institutional support. Healthcare is important so we want to look at other nonprofits or institutions that are in that community that have been there and, we believe, are going to be there for the long-term.

DW: What are some of the projects MHL is working on right now?

MA: We, about five years ago, were invited up to Milwaukee and we constructed, and own and operate, a 90-unit permanent supportive housing facility on the south side of Milwaukee that was a re-purposing of an old hospital that we then also added a new wing to. …

We’re also closing this as we speak – a project in Danville that is going to set the southern boundary of our geography. That’s a 65-unit veteran’s housing [facility] that’s under construction. It’ll be completed about a year from now. We’ll then have properties from Milwaukee to Danville. We will also be closing in June on a senior development in Kankakee in a partnership that includes a community hospital providing not only housing but a range of services for low-income elderly.

DW: What is your primary source of funding?

MA: The primary source of funding is the federal low-income housing tax credit program. Then we try to look for as many opportunities as possible to also use the federal historic tax credit program. It leverages additional equity. Both those programs really work on the premise that we’re going to build a property unlike a Class A apartment building in Chicago that’s going to have constrained rents so it’d be hard to attract pure market equity because there’s really not going to be any return. So what we do is we use two programs here that provide a return to equity investors because they get a dollar-for-dollar reduction in their tax liability. So they invest with us and give us the capital that we need to execute our mission, and their economic return is really through a reduction in their federal tax liability. We also use … the donations tax credit which is a state program. …

We also raise our own money – private philanthropy from individuals and foundations – because we want to supplement the federal resources for state supportive services. … We don’t want to be fully dependent on the federal tax credit programs because they take a long time and the need is growing faster than the time we can accumulate the capital, traditionally. So we’re trying to be innovative in many ways.

DW: What are some of MHL’s current legislative goals?

MA: For this session in Springfield, we want to make sure – and  we’ve been advocating for – the restoration of the cuts that the governor was proposing. That’s important not only to the residents we serve, but it’s also critical in making the argument that – if you don’t even want to talk about it from a social justice or basic human dignity point of view – from a fiscal position,  those programs are very important because without them, the state will be spending more money.

DW: What about at the local level?

MA: At the local level, we’ve been advocating with the city on the SRO ordinance that passed last fall. We were working with the administration on that ordinance as well as the affordability ordinance that just passed in January that’s trying to leverage dollars from market rate developers to create a pool of funding.

DW: What has been your experience working with homeless individuals?

MA: Good. I know there’s various statistics as to what percentage of homeless on any given day are veterans. I would say that probably at our properties, 10 to 15, maybe 20 percent of our residents are vets. … It’s not like we had to go out and target them. They were just homeless individuals. … We have started now to get into more specific preference execution for the vets. For example, in Danville, that is a facility that will be dedicated 100 percent to veterans. It’s going to be built on the campus of the Illiana VA Hospital, which serves a pretty sizable geography. … The nice thing here is the community college is already doing programs with veterans hiring with companies in the surrounding community, and Danville is part of the larger Champaign Urbana metro areas. So there are a lot of opportunities, and now we can feed into that as well.

DW: You were an aldermanic chief of staff during the 1980’s. Have you ever considered going back to work in government?

MA: I like being the position where we are here. We’re the implementer. We have to understand and partner [with government], and I’m very grateful that I understand government – to  the degree that anybody can. But I’m very happy in the position here of kind of being, effectively, in the private sector trying to get things done and trying to accumulate the resources to do that. … [Government is] our partner, hip to shoulder. Basically in everything we do.

DW: What is your favorite part about your job?

MA: I love the people I work with. We’re a wonderful organization. We have a fantastic mission. … You take something that was either vacant land or a derelict property, and now it’s a beautiful real estate asset that is serving a real need. For me, that’s pretty exciting. [I] can’t ask for a better job description. I would say that’s what motivates us. We’re very committed to doing excellent work to improve neighborhoods for the long duration, but it’s all grounded in what we are really doing to help benefit the livelihood and future trajectory of our families and residents.

This article originally appeared in The Daily Whale. You can read it by subscription by clicking here.