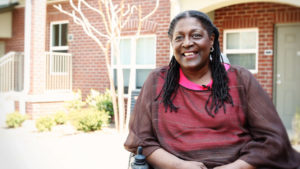 Thirty years ago, Terri Ruffin made the decision to join the United States Army. Her superiors quickly recognized her talents and it wasn’t long before she was selected to receive specialized training in Air Traffic Control School.

“I became the first African-American female Air Traffic Control instructor in the U.S. Army,” Terri said. It’s a distinction she is rightly proud to hold.

After a year-and-a-half in service, Terri was transferred to a military base in Germany where she completed her enlistment. Though Germany was beautiful, Terri missed home and returned to Georgia to be near her family.

“Everything was going fairly well for me,” Terri remembered. “I got married. I had two children. Things were working.”

But when her marriage suddenly dissolved, Terri found herself a single mother of two children, struggling to make ends meet. Trying to find safe, affordable housing in a decent school district was difficult.

Then in 2005 disaster struck. While Terri was standing in a median, waiting to cross the street, a driver lost control and hit her. The car accident cost her a leg and changed her life forever.

“I survived, but my home wasn’t accessible,” said Terri. “Once again, I had to try to find suitable housing. It was difficult finding a place that would meet my needs. It was a scary time.”

Everything finally changed when Terri visited Mercy Housing’s Terraces at Parkview on the day after Thanksgiving in 2010.

“It had everything I needed and the rent was unbelievable,” recalled Terri. “I could hardly breathe.”

Today, Terri finally feels settled after many years of struggling to find a place to call home.

“I have my own place and everything is made for me. I never have to think of where I want to move next. I’m home. ”

Terri applauds what Mercy Housing is doing to narrow the gap between the supply and demand for affordable housing, especially for veterans. She’s experienced first hand the struggle to find safe, quality, affordable housing that too many of our nation’s defenders have faced when they return home.

“It costs so much to find a decent home,” she said. “But Mercy Housing provides options.”

We are proud to serve Terri and all the other veterans who have come home to Mercy Housing over the years.

Strengthen the Lives of People in Your Community