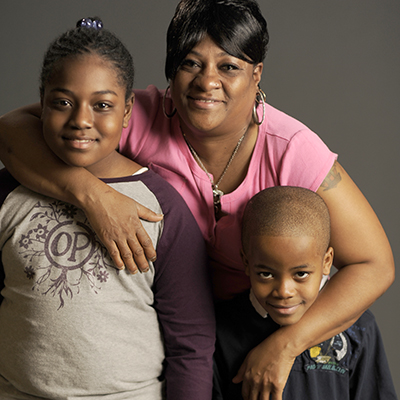 Mercy Housing Lakefront opened the Wentworth Commons Apartments in June 2005 and soon became home to 24 single adults and 27 families, including 85 children who were formerly homeless or at great risk of becoming homeless. The Wentworth became more than a home to the Voss Family. It enabled them to live in hope of a better future.

In 1997, as victims of domestic violence, the Voss Family lost their home and sense of security. Having no place to go, Ms. Voss and her four children moved into a homeless shelter. For the next eight years, she worked hard but struggled to find full time employment and permanent housing.

She describes the worst part as the impact this had on her children. Over the years they became increasingly withdrawn, they told her “mom please don’t tell anyone we are homeless, don’t even say the word.”

Ms. Voss began to lose hope. “I kept praying for housing,” she said. “I cried and cried because we were miserable.”

Their struggle finally came to an end when the family secured an apartment at the Wentworth Commons in Chicago.

“When I found out that I had keys to my own apartment I cried again, but this time it was because I was so happy,” she said.

“Being in a shelter that long can sometimes take over you,” said Catherine Brown, Wentworth Commons case manager, “but Ms. Voss has accomplished a lot since she moved into the Wentworth five years ago. She didn’t let being homeless ruin her life.”

The staff and services offered at Wentowrth Commons have provided the Voss family with support and new opportunities. Ms. Voss participates in the recovery support group and utilized the services of case management to secure employment with Chicago Commons where she is a home health care nurse for the elderly. Her job allows her to give back and work with people who need assistance. Ms. Voss saved up and recently purchased driving lessons and a car, something she has been looking forward to for a long time. For Ms. Voss’ children, Wentworth Commons is a stable foundation upon which to build a successful life without the uncertainty or fear of living in a homeless shelter.

“The children were very shy when they moved into the Wentworth”, said Catherine Brown, “but have now opened up because they feel a sense of security. They often come in the office and give us hugs.”

Becoming part of the Mercy Housing family has enriched the lives of Ms. Voss and her children. Like many Mercy Housing residents, the Voss Family now has the stability and support to live in hope of a brighter future.

Strengthen the Lives of People in Your Community